What is Butcher Block?

Also known as a "chopping block," butcher blocks take their name from their similarity to the texture and thickness of the wood used to create the cutting boards found in butcher shops and other meat processing facilities. They are used as a wood surface for tables or countertops and are defined by their exceptional strength and unusual appearance.

End grain butcher blocks are a variety created by gluing together hundreds of pieces of wood to form a durable surface from their cut ends. Edge butcher blocks, meanwhile, are generally created through the joining of several small planks. An easy way to tell the difference between the two is to examine the surface of the block - the end grain variety will typically feature a checkerboard pattern whereas edge butcher blocks possess a striped appearance. Though end blocks are the strongest variety of butcher blocks, they're also the most expensive. Sugar maple, teak and walnut are the most popular woods for the creation of butcher blocks, which are generally finished with a non-toxic oil in order to keep them safe as a surface for food preparation. 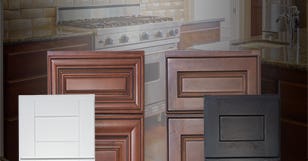